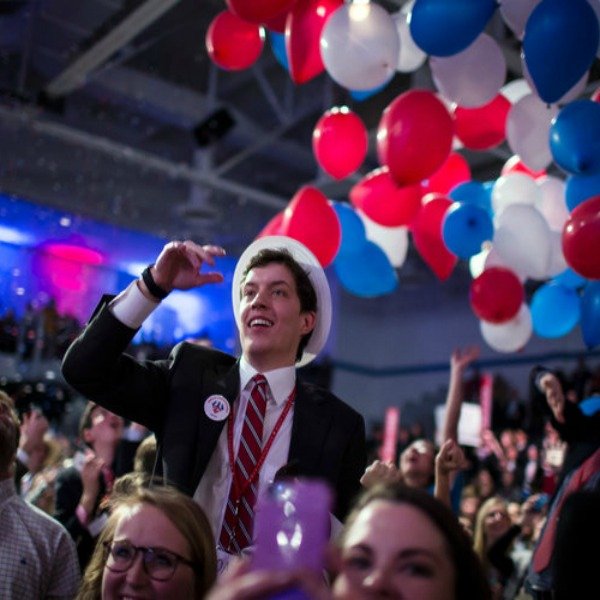 I worked hard to make certain Breaking the Story is unbiased in terms of politics. While my novel is a romantic political suspense, my message is more about the importance of integrity in journalism than anything else. With the 2016 presidential election on the horizon, I thought it’d be fun to give my readers a break from real-life politics—the debates, incessant phone calls, and endless stream of television commercials—with a sexy scandal within the political arena.

While I am a bit of a political junkie, I do my best to keep my opinions to myself. Nobody likes a know-it-all, especially when it comes to something we feel passionate about like politics, religion, and sports. I recently had the opportunity to attend the Mock Convention at Washington and Lee University in Virginia where my daughter attends college. Since 1908, every four years, student volunteers at the college have hosted a mock political convention, complete with roll call, for the non-incumbent party. The school holds an amazing record of accuracy in forecasting the party’s nominee. They have only been wrong two times since 1948.

For Mock Convention 2016, over the course of two days, student organizers brought in world-renowned speakers like Newt Gingrich and Dick Cheney to address conservative issues relating to the Republican Party. This inspiring lineup imparted their wisdom upon this impressionable group of young people, not by forcing their opinions on them but by empowering them to be good citizens. The universal appeal was for these kids to get out and vote, regardless of party. Educate yourselves on the issues facing our nation—the $19 trillion debt, the immigration crisis, foreign affairs.

I had an opportunity to talk with many of the students, most of them my daughter’s friends, while I was at the convention. Understandably, politics was at the forefront of everyone’s minds. Many of these students have listened to documentaries and news reports, read the continuous stream of social media tweets and Instagram post concerning the state of our nation. I was not surprised to learn that these students had mixed emotions concerning politics, but I was comforted to see how much they care. These millennials are the future of our country. They owe it to themselves and their future spouses and children to explore their options and make an educated decision before they vote. Regardless of age, we each have the responsibility to pick the candidate that best represents our principles. Don’t take a candidate at surface value. Listen to the debates. Visit their websites. Find out what they really stand for. Voting is a privilege and every person’s vote counts.